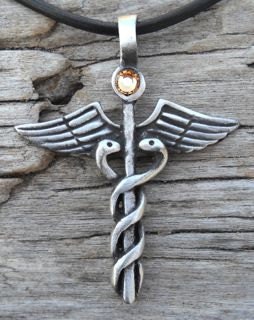 This classic medical symbol Caduceus is handcast and hand-finished in solid American Pewter and adorned with Genuine Swarovski Crystal. Golden Topaz is the crystal birthstone for November and the Zodiac signs Scorpio and Sagittarius when they fall within the month. The Caduceus is on an 18" leather cord with a lobster clasp and 2" extension chain, or you can request one of our additional necklace options.