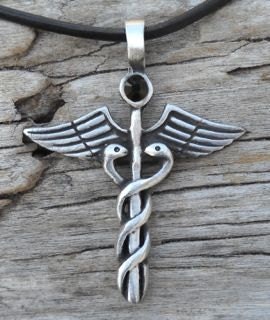 This classic medical symbol Caduceus is handcast and hand-finished in solid American Pewter and adorned with Genuine Swarovski Crystal in Jet Black Onyx. The Caduceus is on an 18" leather cord with a lobster clasp and 2" extension chain, or you can request one of our additional necklace options.