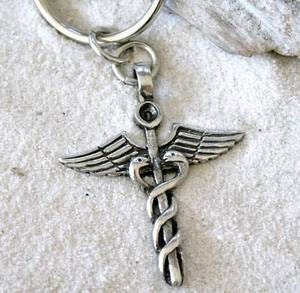 This classic medical symbol Caduceus is handcast and hand-finished in solid American Pewter with a shiny finish resembling antiqued sterling silver. The Key Ring is the classic split ring and measures 1 1/4 inch or 32mm.

Caduceus Details
Length including loop: 1 7/8"
Width: 1 1/2"
All of our pewter is lead free, nickel free and cadmium free.